Bitcoincryptotips.com and Crypto Consulting and Investment team founded by Ian Scarffe attended the London CryptoCurrency show on Saturday 14 April, and it seemed the overwhelming message from the many experts there was that the future is looking bright for cryptocurrencies and ICOs.

Taking place at Novotel in London, the show was the chance for potential investors to pick up tips from experts through a series of talks and seminars, as well as speak to ICOs who were looking for investment. The event was aimed at everyone, so there was a mixture of seasoned investors right through to people who were getting their first taste of the cryptocurrency world. 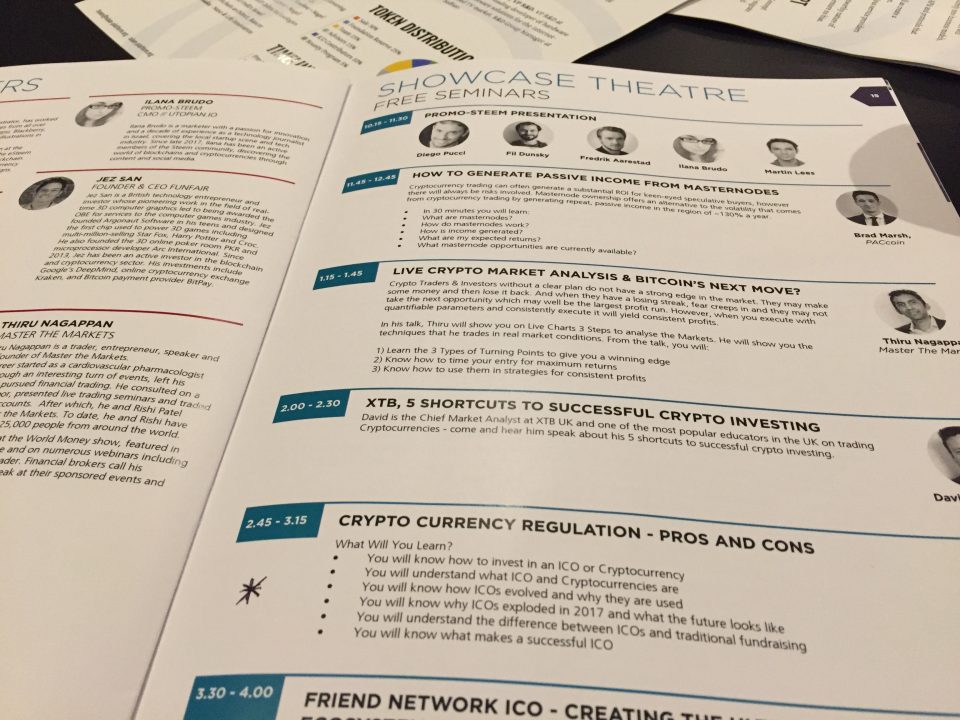 The action in the main auditorium kicked off with a session entitled ‘Cryptocurrency investing in 2018 and beyond’. This was a chance for people to listen to the moderator Matt Starkey (Promo-Steem), who was backed up by the vastly experienced panel of Michael Hudson (Bitstocks), David Powell (VRBex), Linda Leaney (a former investment banker) and George McDonaugh (Kryptonite1).

George McDonaugh was first to speak, stating that he believed that with the improvement we are seeing with cryptocurrency exchanges then soon it is going to be a lot easier to invest in altcoins. His advice to potential investors was to dig as deep as possible when deciding what to invest in, and to check things such as forums and social media groups, rather than being wowed by a flashy marketing campaign.

David Powell and Linda Leaney were next to speak, and they began the discussion about utility tokens. Linda made a very nice comparison of utility tokens and things such as Amazon Prime or Airmiles, in the fact that they give you access to certain content on a platform.

Perhaps the most interesting point made during this session was at the end, when Matt Starkey asked for the panel’s opinion on whether they thought we had seen the bottom in terms of the recent price of cryptocurrencies. Michael Hudson answered, and said that he only had some short term concerns and thinks we’re close to the bottom if not already there. He said that people should use this quiet period to educate themselves, to gain a greater understanding of the technology, and most importantly to look at the current price drop as a sale.

Another wise piece of advice given by Linda at the end was that she urged investors to spread their investments around different exchanges and wallets. After all, you wouldn’t keep all of your money in one bank account.

The second session then moved on to the topic of ICOs, with the a session called ICO investing in 2018. The panel of Heremaia Durie, Patrick Lowry (Iconiq Lab), Lilliana Severina, and Shane V. Kehoe began by talking about the most important thing to look for when investing in an ICO.

Heremaia said the things to check are the marketing campaign, as well as if the idea is oversubscribed, and if the white list is hard to get into. Patrick said he believed one of the most important things to look at is the use case of the blockchain technology and token, and also do they have a platform that exists. Lilliana put her five most important things in points - check out the team is strong, is the market cutting edge (AI, VR etc.), is there a lot of competition in their market, is there a lot of regulatory risk, and finally where are they currently at with development.

In conclusion the panel stated that when looking for an ICO be patient; don’t look to make a quick buck but instead look for something that has real long term value. And much like the previous session the point was made to really dig down when doing research rather than just being drawn in by their marketing campaign.

A good point was made right at the end when an audience member asked the question ‘how do you protect investors from the potential change in coin price when investing in an ICO?’. The panel answered that they give you the opportunity when purchasing tokens to either do it at today’s rate, or to leave the rate until the date the tokens are released.

Aside from the main auditorium, there was also an area called ICO Central where ICOs would get thirty minutes to give a presentation on their idea in front of the potential investors. There were many different and interesting ideas which were presented from many different industries, and as you can imagine this was a room full of energy.

As well as the ICO Central giving them a chance to present, there was also an area with stands where ICOs and other crypto related companies could talk to people. Again there was a wide range of companies on display, and this was a very busy place as the 20 or so stands were visited by the conference attendees.

One of the most talked about subjects in the crypto world in recent times is about the regulation of it, and that was the topic for the first afternoon session as we kicked off with ‘Will government regulation affect Bitcoin and other cryptocurrency prices?’

The first question to be answered was why do we need regulation for cryptocurrencies, with Johnny Fry on the panel making the point that the main reason is to protect people, and that the more regulated it becomes the more and more institutions that are likely to invest money in it.

The above statement was back up by the anecdote that a number of Chinese investors had recently visited London with the sole purpose to invest in cryptocurrencies and ICOs as this is banned in their country. There was a whopping $1.8 million invested during this time.

When the discussion moved on to questions from the audience a question was asked about how businesses protect from anti-money laundering, with the answer being that this is a huge growth area and there are new tools developing all the time to combat this.

The subject of regulation was then the topic of Johnny Fry’s session in the showcase theatre as he gave a talk on the pros and cons of cryptocurrency regulation.

He began by giving an introduction to ICOs for anyone who was unsure about them, and during this he also described the typical ICO investor - mid 20s - 40s, and likely to invest £00s rather than £000s. He also said that institutions are increasingly getting involved. An interesting point was also made that if cryptocurrency is regulated properly, then market capitalisation will go up massively.

He then went on to make a similar comparison to Lilianna in the earlier session; comparing ICOs to Tesco clubcard points and other similar loyalty schemes, before stating what he believed was most important when looking for an ICO to invest in, saying that a strong team, strong business plan, and a lawyer’s name in the whitepaper, and a passionate community were all things to look out for.

With regards to individual countries banning cryptocurrency, he again stated that this will simply just ensure that people will go elsewhere to invest, much like the Chinese.

Back in the main auditorium it was time for the final session; ‘Trading cryptocurrencies’. This was a varied session with a very interesting panel of speakers leading it.

This session began with introductions, and among them was former ITV news correspondent Glen Goodman , better known to some as The Shares Guy. He began by talking about how he had left ITV and was now a full time investor after betting on the collapse of the market during the collapse in 2008/09.

After the introductions the panel began to talk about the price of Bitcoin and cryptocurrencies. It was put forward that the market is sentiment driven, with there being 43 sentiment indices behind it. Alex Kewley from Market Psych then said that cryptocurrency should be looked at as gambling rather than investment.

Richard Muller from Alpha Harvest then stepped forward and spoke about different types of crypto trading, long, and day. He said that personally he would stay away from day trading, as nowadays a lot of this is done by computers.

There was then some advice for people who are new to cryptocurrency, with the panel suggesting that potential investors could play around with dummy money first of all to get some practice.

Finally the session was rounded off with a question form an audience member who asked who to trust when it came to advice about cryptocurrency investments and ICOs. They said it was difficult to know who to trust, although as a rule to stay away from people who said things such as ‘it will’ rather than ‘it looks like’, as after all nobody can predict the future!

And so that final session brought to an end what had been an interesting day, where experts had been able to share their knowledge with a number of potential investors as more and more people look to get involved in the crypto world.

If like them you would like to know more, then click here for a download of our free ebook which talks about all things cryptocurrency and is a great guide if you want to get involved.

Download your free guide. The Ultimate Guide to Bitcoin and Cryptocurrency

About Crypto Consulting and Investments and its founder Ian Scarffe

Crypto Consulting and Investments LTD provides Advising and Consulting services to Blockchain Companies and clients who wish to raise funding through an Initial Coin Offering.

Ian Scarffe is a serial entrepreneur, investor and consultant with business experience from around the world.

As a leading entrepreneur, Ian is on a personal mission to develop a culture of entrepreneurship, helping startups achieve their full potential as well as helping to expand existing companies.

A leading expert in Bitcoin, Blockchain and Crypto industries, Ian is at the very heart of revolutionizing the financing industry across the globe and currently consults and advises for a range of multi-million dollar companies.

Ian’s overall mission is to foster a society of economically independent individuals who are engaged citizens, contributing to the improvement of their communities across the world.

Ian Scarffe has outstanding entrepreneurial skills and commercial acumen with innovation and motivation. With the capacity to work at strategic levels, Ian possess exceptional interpersonal, communication and negotiation skills.

A passion for customer service, wealth of knowledge and vast amounts of hands on experience in almost every role, means Ian has valuable insight into millions of customers, proving him to be a valuable asset to companies across the globe.

View all posts by: admin